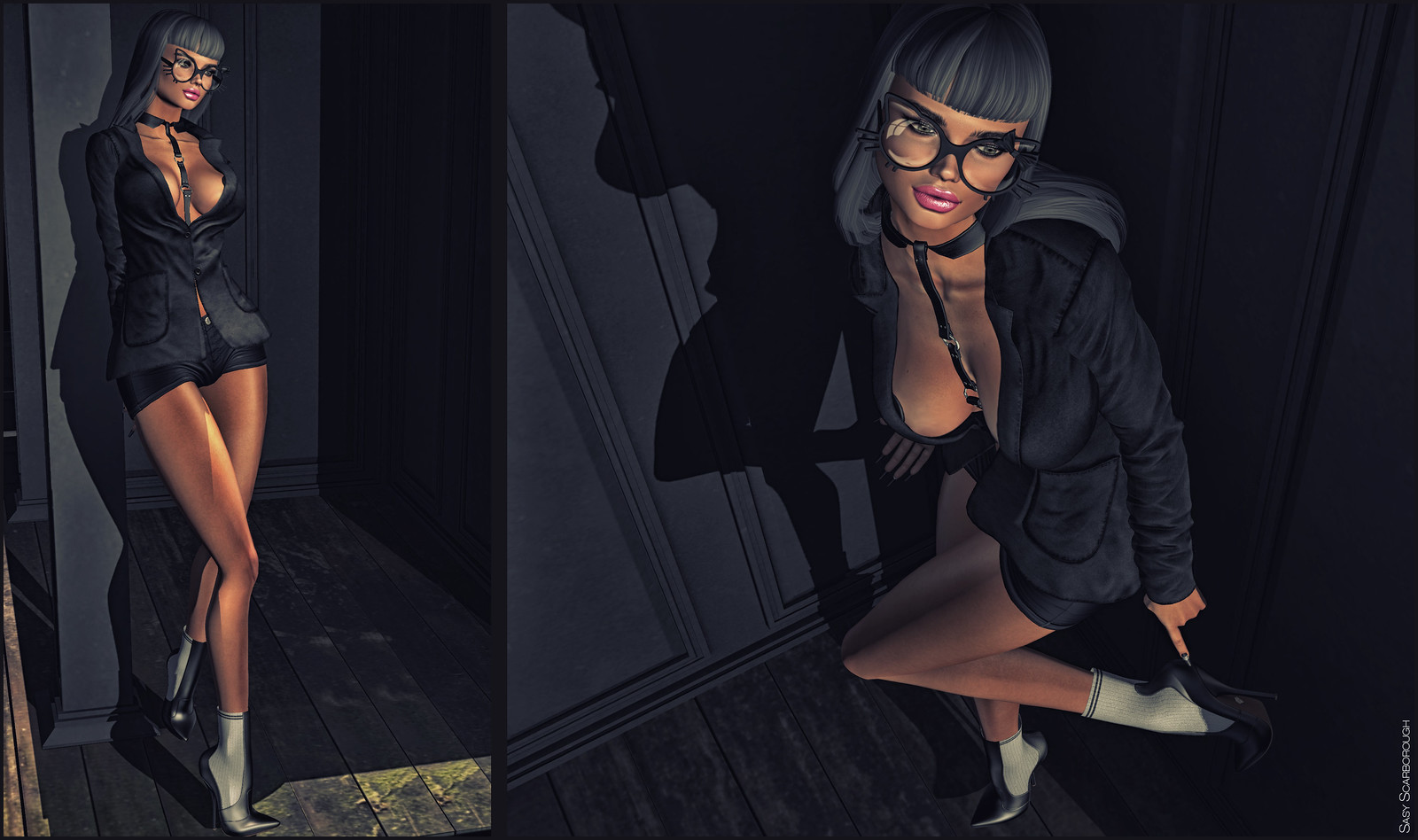 The other day girls were asking in SL Bloggers Support about an upcoming event called The Secret Hideout, it is now open, but it was a quick TP by all to check it out with early access. The event is very well laid out, done in circular roads, but so that it is easy to end up where you started by keeping booths to your left. I have a thing about that, I have to start with the store on my left side, then walk until I get back, then turn around and go the other way with the stores on my left. I cannot weave.

There are so many wonderful items there, leaning towards the macabre, but not in a too costumey way, definitely wearable in the every day. I grabbed this hair by Atomic there, it actually has a bow that you can hide, and widows peak bangs, which I am usually all for, but I loved this look with this outfit. The staircase I am under is at the event and an awesome picture taking prop. You will see more of it in another post, or when you go purchase it yourself.

I also visited Black Fair the other day and ended up grabbing everything I could get my hands on. This suit jacket is divine, and I was overjoyed when it fit so well over this harness that was also at the event by another creator. The harness has cute collar parts, and it also came with pasties built in, in case your jacket gapes. There were fantastic pants that go with too, and I did grab them in pinstripe – love me some pinstripe – but opted for a shorty look this time around.

It gave me a chance to show off my boots I picked up at the recent shoetopia that finished yesterday. If they are not already in the store, they should be soon, they are great for this kind of combination.

I was looking at my Flickr the other day, and someone had added me, so I checked them out and holy smokes, I spent an hour or so looking through their Flickr and wanted everything. No joke, I think I only left about 4 things behind in their store, and believe me it is a HUGE store of items. The glasses I am wearing are from boutique 187 and their accessories are just amazing, they have such incredible mesh skills, I was walking around in awe. I had originally started shopping on Marketplace, but just as I got to the limit of ten items in my trolley – Marketplace makes sure you don’t go nuts – I saw that if you go to the store and you join the group you can earn 25% store credit, now that is something to make the trip for, mind you, it was also because MP was going to make me shop in batches and that takes all the fun out of it. I actually like shopping in person, and you never know if a Marketplace store is up to date or not, but the reason I ended up in theirs was because they put an image in their flickr telling you they had just updated it.

I also try and shop in stores as often as possible, while Marketplace is a great feature in Second Life, the stores pay a percentage of each purchase to Marketplace, and they also pay rent for their stores, so I would rather help pay their rent, than commission, plus it is nice to get some air that is not platform air.