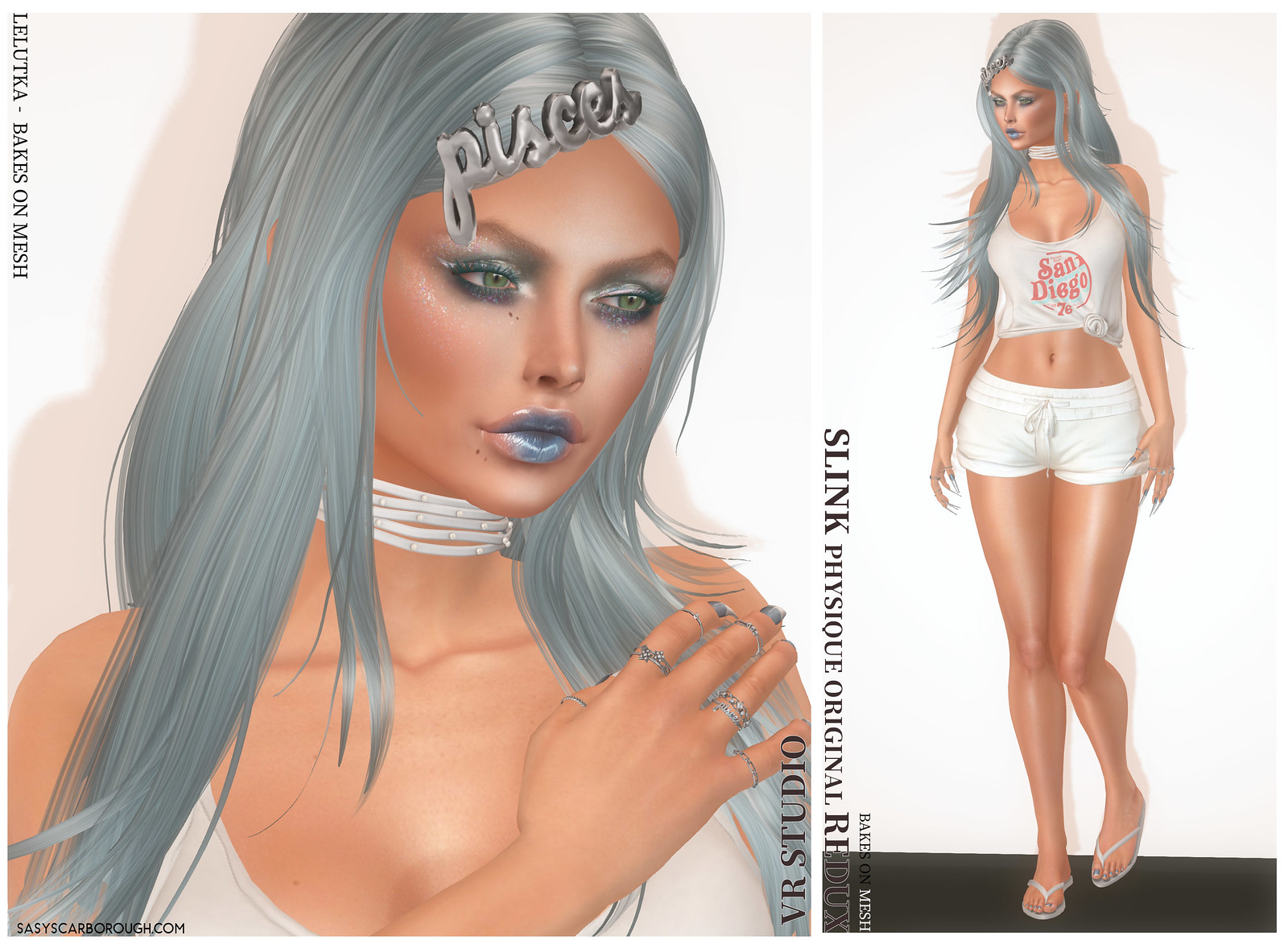 So anyone that has ever paid much attention to my blog knows that I tend to Mod things. If a runner for a hallway is mod it might become a runner on a dining table, or if a pot plant for a desk is mod, it may end up being an over-sized planter. I can’t help it, if I can I will edit it. I also do things to accessories if I can, and so yesterday I mentioned the Zodiac set by Yummy at Uber, and I mentioned the word and symbol separate rings that everyone had to have, so I was standing around and I was thinking and then I was rezzing and then I was stretching and then I was attaching to my nose and the next thing I knew I had a TIARA/HairClip with Pisces that not only ROCKS MY WORLD but fit the hairstyle I was next in line to put on from my Exxess shopping spree the other day. Now originally the band of the ring was still visible and it did look awesome with this hair, and didn’t poke out in places, but even more exciting and huge kudos to Polyester for making separate faces for the rings, I was able to make the ring band transparent, so this is going to fit most hair I have.

I am so excited by this, because honestly every so often I go on this ‘I need a Tiara, I am a Princess” rampage – do Princesses rampage? should they rampage? – anyway over the years it has been a thing, and some very disappointing outcomes. But this, while it is not meant to be this big, and not meant to be perched on my head is making me super duper happy, and that is what matters right. So whether you are an awesome Pisces Princess or an Aries Amazon, or a Legendary Leo, you should get your mod on and rock your sign, and if you are a little more subtle than I am, well you still have the option to just wear it on your finger as intended.

Still enjoying my run with the Slink Physique Original and what better place for a Pisces Princess to spend the day than the beach and this ensemble works for that so well, these are older pieces by Tee*fy the shorts are just adorable and the tank is perfect. I then grabbed my Slink Thongs, not flip flops, THONGS that go on your feet, and I am ready for whatever the ocean brings. I did add some more of the gorgeous Ice set makeup from AlaskaMetro and removed all the additional mermaid stuff that I was going to pile on but decided to be more natural and less fork to the hair.

I may have just declared an Embargo on my friend Kavar while writing this post, this Tiara has Super Powers or Bossy Powers, one or the BOTH! I love being a Pisces Princess >)))*>