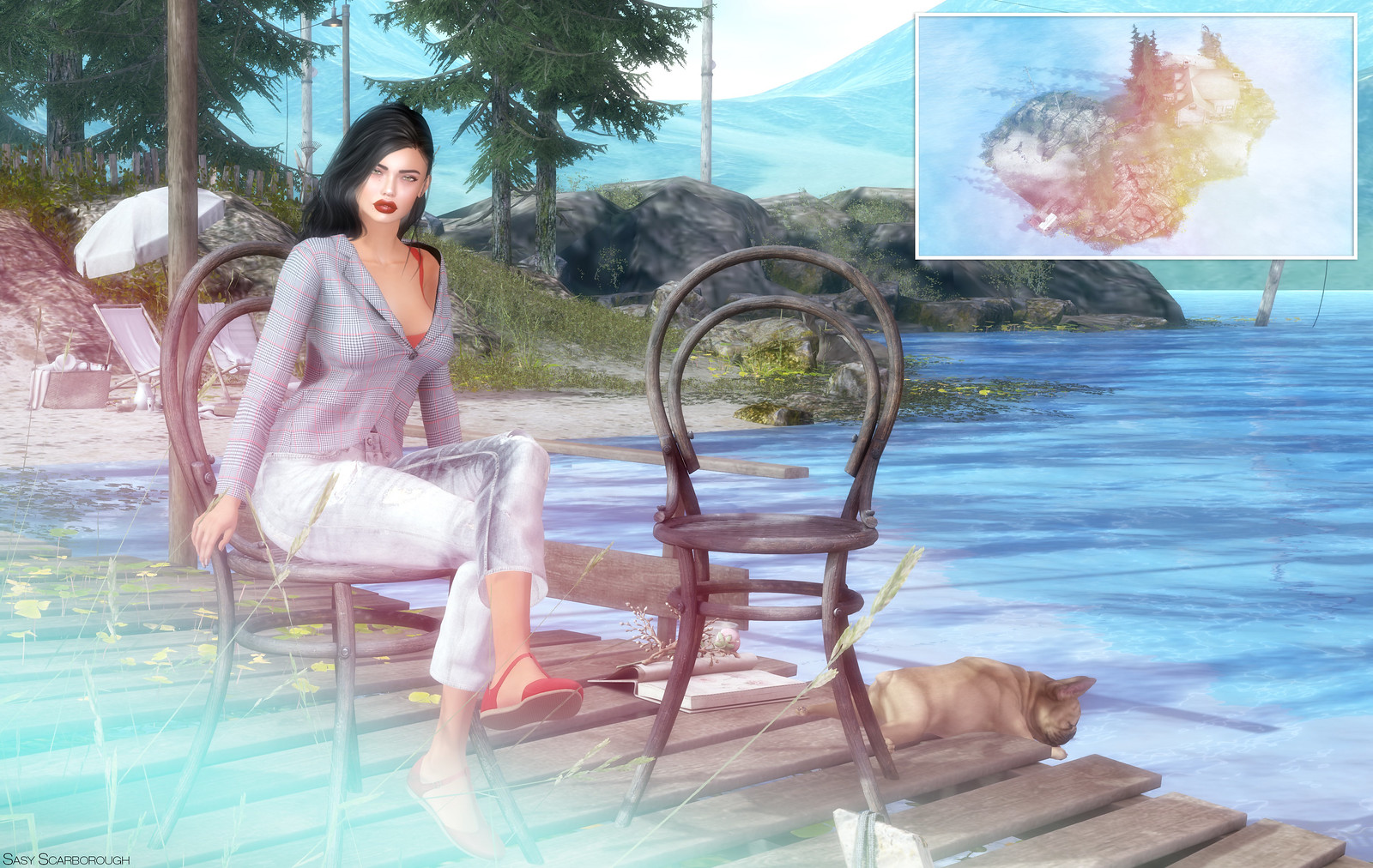 After Hair Fair we usually have a break from doing much of anything, but it is time to get back into it, and with the introduction of Bake on Mesh and the excitement I am feeling with it, it was time to start sharing my Second Life again. I also had a very exciting morning that I will share info on later in the week. Things are getting very fun for Second Life, and the wonderful enhancements that are taking place are just stacking one after another to bring me much happiness.

So it turned out fortuitous that Nutmeg just opened their ‘The Getaway” region up to the public, they do this every so often and as in the past, the layout overall is just divine. The landscaping the view, and the elements used, come together in a magnificent way.

Prepare yourself for a delight to the senses, and either visit alone or with a group of friends. Space is just the right size for a really enjoyable chill-out moment for you and yours.

I am so excited by Bake on Mesh, if that has not been made clear to you all by now, then understand it, it is true. With the amazing Redux update included in all of Slinks body parts, the opportunities abound. I have dropped complexity in a huge way, and the fact that I am not in pieces at all now means tping and crossing regions just seems effortless now.

I made my own alpha for this great blazer that I have on, tinted my tank top that is mod, grabbed alphas from random items I already owned for the jeans and I was good to go. Then stacking on as much makeup as I wanted with my own custom Moles and honestly not giving any of it a second thought, just made Second Life for me incredibly fun again.

I think that that fun may have exploded into my shopping, as Sn@tch is having a SALE and I was prepared for hitting them big time when Bake on Mesh went live, but after 110 items purchased I think I cleaned them out a little more than even I expected. I had this major epiphany about two dozen or so items in that I could now wear anything with holes or crocheted etc and put on a bra under it and nothing would clash, and that was the end of me, I was in for it all.

I ran on over to Exile after that to catch up on some hairs I have missed, and landed in the middle of a large group of people, knowing full well I was at the time going to be yellow and blue (if not using a bake on mesh viewer you look very odd) and I just laughed and had no cares about it, it was the 2019 equivalent of tping to a store bald in glitch pants.

Firestorm is going to be releasing their Bake on Mesh viewer as soon as possible, and the preview versions are wonderful, not a problem so far, and I cannot wait for everyone to really embrace Bake on Mesh.

LeLutka also did an update to their heads, with the 3.4 versions have updated versions of the Bake on Mesh button. So if you did not get yours yet, go hit up the redelivery terminal, or wear your head and it should just send to you.