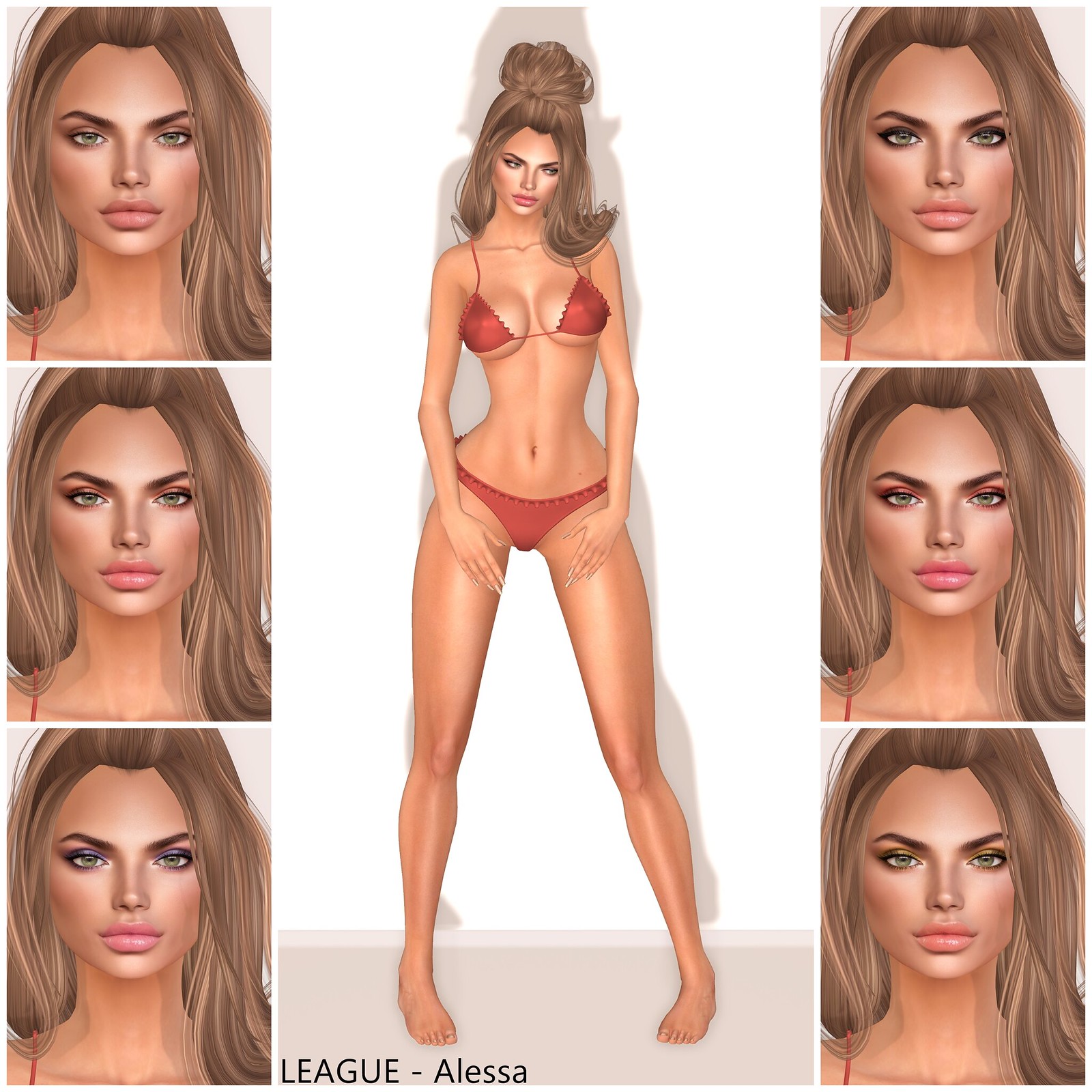 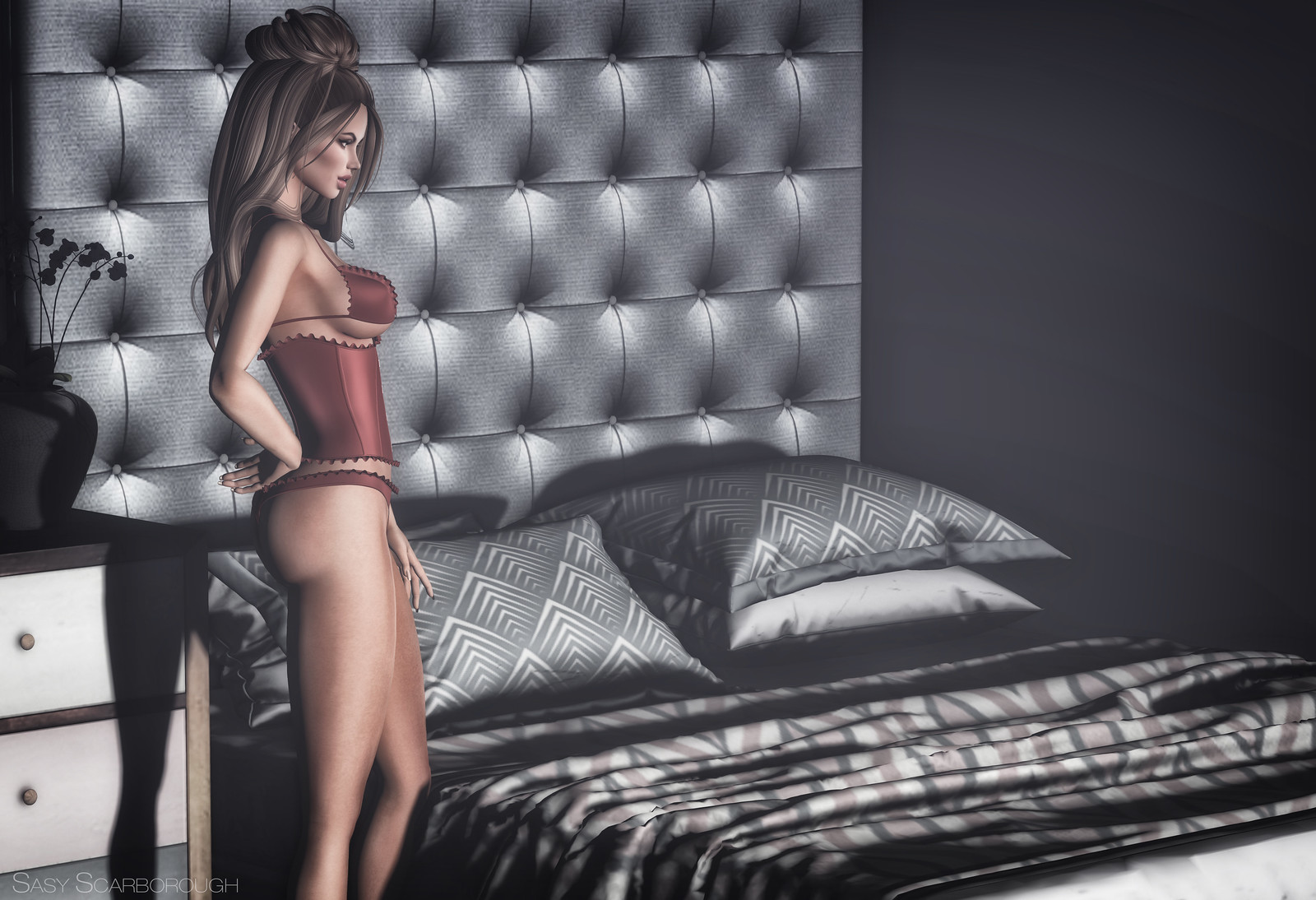 Skin Fair is approaching fast, and we have been over one full sim so far with early access as Bloggers, and you are going to have to dress for the occasion, making sure you wear appliers to quickly turn off or on as needed in a hurry, and hair that is off the face, actually just hairbases are probably better.

One of the things that the organisers did this year was request that Official Bloggers of the event cover the event OLD SCHOOL! which in the skinning world is showing as many of the details as possible in a post. It doesn’t mean you have to not do a pretty arty picture in your usual style, it just means you also need to really bring attention to the skin/s themselves.

This is how we used to blog skins before appliers were a thing, before skins were in such abundance and we used to wait months for a big skin release. There were those that did naked, there were those that shot in lingerie and swimsuits. Close ups of the faces and full length, with some major descriptions, because back then there used to be so many layer options that you had to keep track of, now with appliers you are able to turn on different uppers and lowers and add brows etc. In the olden days, you had one skin having upwards of 40 different system skins in all manner of options. It was a great way to share information with the readers, and based on what was shown, what was shared, you often got a lot more information than the demo could give. That has changed a lot now too. I have missed doing posts like that, and while not an Official Blogger for the event, I was granted early access along with SL Bloggerati members, so decided to kick it old school anyway.

League has made gorgeous Exclusives for the event (only exclusive during the event as in not sold at stores until it closes for the year).

The Alessa skin is a LeLutka applier and if you are a League customer you will notice the NEW HUD options as they have changed slightly to give you more opportunities of wear. The base skins (no makeup) have 4 Brows and a No Brows option as part of the skin. Then there are 5 Eyeshadows that are now on the eyeshadow layer, this means that you can use them not only with your League Alessa skin, but could also wear them with any other League LeLutka skin applier you may have…also due to the rerouting option on the LeLutka head, you could mix them with other options or stack as you see fit.

Then there are 5 eyeliner options, catseyes and swoosh styles that are from fine to thick and just gorgeous, they come on the eyeshadow layer also, but again rerouting means you could stack them on the tattoo layer over the shadows. Then there are these amazing glossy lip colours, they are more like liquid gloss than lipstick, and they look amazing, you can even blend them with the LeLutka HUD to soften them. I have shown a mix of the options on the HUD but you can try more with the demos.

Then you have a mix of moles or freckles with the remaining five buttons on the HUD so you have combinations that you will have a great time mixing together. There are also clear buttons on the HUD but you can do the same with the LeLutka head HUD so whichever is easier.

Because there are so many head options and shape variables, League has included an A and a B option of the Skins, they vary only slightly but depending on your head and its shape, you may prefer one over the other, but as both are included you could even use both to occasionally change your look just that little bit.

There are shapes also at the event, and some brows and lipstick options for purchase, the lipsticks also have the A and B and they really do change your look. I haven’t taken pics of those as of yet, because I got distracted by my own hotness. Well that and the lovely hair by Exile that is at Blush at the moment,  and just suited my whole mood for this post.

Then we have this lingerie that if you saw this at Frou Frou event and did not get it you need to go back it is hot hot hot. It also comes in separate pieces even though the demo is all in one, which upon reading the notecard demo I realised and that was an instant yes from me. You only have a few more days to go there, so get prepared for all the lovelies to be found.

What better way to show the skin and lingerie than a fantastic bedroom set by Cheeky Pea that is at this Mod Round of Uber. Love the linen on the bed, and this magnificent headboard, the chest of drawers is so fun also in its vintage look. It is gorgeous and such great duo tone colours for a mixed room.

The Idea of Her – Exile @ Blush