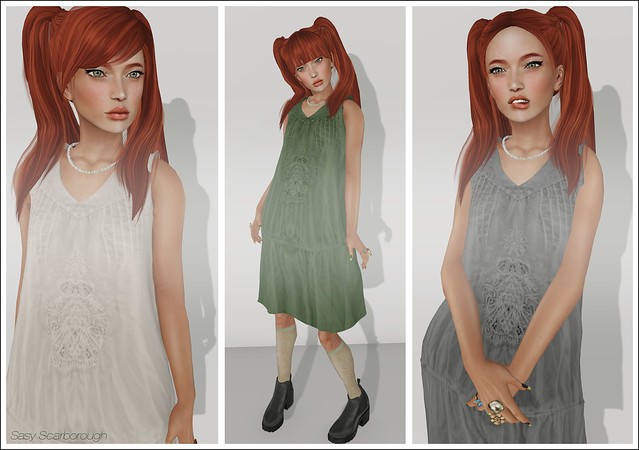 I don’t have feet on, it is kind of bizarre. I also had to actually look for alphas and work that all out, seeing as my head alpha has feet and hands included, so I had to find the head with hands option only. I did all this of course while standing in the middle of an event, bald and having fun with SySy.

I had to take her over to Kustom9 as she wanted those adorable Mexican dresses from my post the other day. I wanted to go back and get the boots I had ummed and ahhh’d over and then couldn’t get out of my head, by Bleich. They are very cool, and I love the look of a real frock dress and then workers boots and pretty socks…what is not to love.

The dress is actually by the same creator as the others, I went over to their store and fell in love with it. It is sold separately, but it was a fatpack must. Hud driven and 7 colours to choose from, one is even pure white, which is all win. The detailing again is perfect, and the fact that it buttons up the back with real buttons had me at Hello.

The other thing to have me at Hello, is this hair by Chemistry, the hair that just keeps on giving. I had seen it on someone else earlier in the week, and made Whimsy remind me we had to go get it. This was a strange thing though, the store we tp’d into was tiny, and in the sky, with hair posters that did not look like vendors at all. There were also two people in there, and honestly I felt like we had tpd into someones house by accident. We left, relooked up the creator, and sure enough it was the correct place.

The vendors which just looked like pictures of pretty girls on a wall, were not buyable, and it was only by knowing that hand icon means scripted, did I actually left click on one. Then out of nowhere two tabs up top and three HUDs of different haircolours appeared…that’s right that is all hidden unless activated, which to me may mean a hell of a lot of lost sales, because there is no signs to explain this to anyone, so if you have ever been and thought they were not for sale, go back :).

Now the hair I was looking for, was actually not one of the styles for sale in the store, it was an older style, as it did not have the same hud options, but I did buy a few in the store and then the others off Marketplace. The style does keep giving though, as it has not one, but three bangs styles. The original in the pic on the right, then two add on attachments for the middle and left looks. Fantastic value, and so much fun to wear. I even wore the bangs with another style of hair, and even though they clipped a little at the sides, honestly you would have to really look to realise it wasn’t created that way.

I am wearing a puca shell necklace I picked up from Renegade when visiting their little store on the Kustom9 sim. It is always important to buy things in Satelite stores, I know we all tend to discover a store, and then TP to the mainstore so that you can see the whole collection, but without purchases in the actual satelites, the owners of them don’t know it is through them that they are making the customers.

I have had a few of these necklaces over the years, they are kind of a right of passage Down Under. Once you hit 13 or so they are a full time wear, then other bits and pieces replace them, but I loved mine so much, and I still have a white one, around here somewhere, my original was coral coloured more than white.