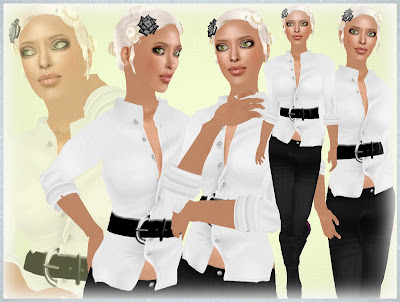 For a few weeks now the subjects of AO’s have come up in conversation with a few different friends. The other day Fia wanted to change his and I was taken all over Phils Place to find some male stands, as he was tired of his previously long running static AO.

AO’s become part of your ‘look’ in Phils Place, my guy has one or two stands that whenever I see them I think instantly of him, whenever I see cute lots of movement stands I think of Kit. So it really is a big deal to replace your existing with a new one.

Animated stands are very popular and last year there were few to choose from, now there is allot more variety and one thing I like to do is use the advanced settings in character and use the slow animations option to take pics in animated stands and use them as you would static poses.

When we landed at Vista a store with a huge assortment of AO’s and singles, I saw the oppurtunity to not only show a larger range in that format but totally fell in love with so many there, and not just the womens ones but the mens ones were hot too.

I have always encouraged people to buy singles from a variety of stores, that way making their own unique Animation Overrider , but I am also old enough to have held that belief based on the ‘back then’ limited supply of animations, that has changed big time in the last year, fully built AO’s can now be as unique as you are.

Now I was lucky enough to be given an AO from Vista Barnes the creator of the AO packs at Vista , and OMGosh, as I said originally it was just me going to take some pics of slowed down stands to show you how much you can get out of them. As you can see in the pic showing the fabulous new Clothing and HAIR from Layniewear – will go more into that in a sec.

Two stands and 5 pics used, whereas I actually took about 9 pics. But after the last few days of strutting around Phils Place using the Divine Extended Girl AO from Vista I just had to show it on Film, and I didn’t even show it all.

You see this AO isn’t like any I have ever used in Phils Place , it seems that Marcus Gray is now offering all Animators the chance to get their own custom AO made with their very own prims and logo’s used, this will of course mean that finally if you need help from the creator of your AO you will be contacting the correct person if using edit properties.

But it was so much more than that, the AO from Vista has so many more buttons than I have ever seen before, and SOOOOOOOOOOOOOOOOOOOO many more animations in the one pack.

Button top left : Walk button that lets you choose from 6 wonderful walks as shown in film

Button top right : Switching to stand button , that allows you to change stands without having to wait for your AO to go through each pose, allowing for you to use the stand you need for that moment if taking pics.

Button next left : Sitting choices button which is loaded with 5 animated sits that are all different enough to cater to anything you are sitting on.

Button next right: Ground sits button with again 5 sits to choose from that are animated and for the ground.

Next left Button: Select Notecard allowing you to choose which AO selection you choose to be your default at that time , which has 3 already filled in notecards for you to choose from.

Next Right Button: Options Menu that has next stand , settings, Help, Typing Ao , Typing Kill (got to love that), Load, Walks , Sit and Stand buttons to choose from.

Next button left : Sit override button on/off so that if you do sit wearing your AO you do not have to remove it or turn it off to sit in the proper sit pose of the furniture , but just turn the sit portion of your AO off.

Next button Right: Help Notecard button, giving you a full notecard of information to help you with your AO

My Favourite Button: ok it’s not called that , but the sit anywhere button is my fav of the bunch , allowing you to just sit wherever you are without having any surface to actually have to be able to sit on, this button once pressed just puts your avatar in the sitting position , animated for a ground sit and very very cute.

Last button: minimise which tucks all the buttons away nicely.

Now back to Layniewear, not only has Laynie Link done some fabulous new clothing but HAIR , oh my goodness isn’t it just adorable. Adra is the name of the style and its just cute little gold coiled buns placed all over the head with beautiful little gemstone clips at the front and pins at the back, really gorgeous and so befitting the Basic Jeans and Buttondown White Shirt which has a wonderful black leather belt on the jacket layer, Yum Yum.

I love this look, especially with working all day and night, it feels light and classy and even though they are jeans the look has a definite professional air about it. So much so that three of us turned up to the Hair Fair meeting last night in the same outfit lol.

The Skin is Alice by Soda in the Minimal Nude Make Up, and the wonderful boots are the Madeline from Dela.