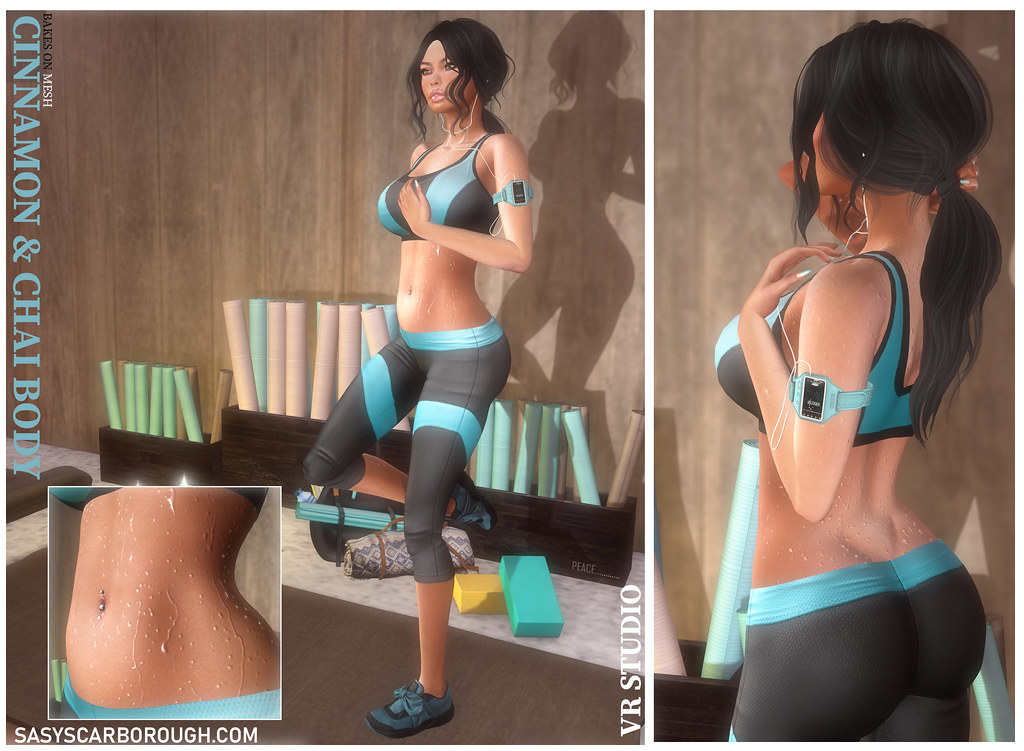 I always like to try and push the boundaries of what I am working with. Cinnamon & Chai is no exception, I am loving this body so much, wearing Cinnamon is kind of like a big HA to the SL UV Gods. Chai still has the SL UV for all but the feet, but even that is a joy to play with.

Speaking of feet, now as mentioned previously the feet are animated to change heights, so the thought process is that Slink shoes and other shoes will not work, that is not entirely true. It is going to depend on your ingenuity and inventory, or your ability to shop and demo like a demon. What is fun is that I am wearing these Vale Koer runners made for the Slink flat foot, and because they fit over the Cinnamon & Chai feet perfectly I was able to wear them and then use the animation to pointe my right foot and the shoes moved with, where as with the Slink feet they would not have done that unless made for. With the fantastic customising options I was able to get them to match to the Cinnamon & Chai athletic set that I grabbed at the Cinnamon & Chai store. I also found that an older gacha item from Vale Koer fit around my arm well enough in a Slink Hourglass fit, so double wins for me.

I love this set it comes in many different colour combos, and this and the pink and black are my favourites but I only had the arm thing in blue.
I was also able to custom match this fantastic belly piercing for the body by Punch, they came out with Cinnamon & Chai piercings so fast and this set I got in the full pack so I have all the metals all the gemstones options I can think of. It even comes in low, mid and high based on where they sit as piercings to the navel which I thought was so cool, I am wearing the mid.

As I said I am obsessed with the Cinnamon UV and for those that did not know yet, Siddean has made it available to other mesh body creators under a license to use, and that info is here and that is yet again another great thing Siddean has done for the SL community (that list grows and grows). That means that if you are planning a body in future you can use her UV and make sure that content going forward is available for as many products as possible, lightening the load for content creators.

I hit up Wasabi the other day and shopped so much I had to sit on the floor while I demo’d, all the gacha styles are now available to buy in whatever colour pack you love the most, I was so excited.