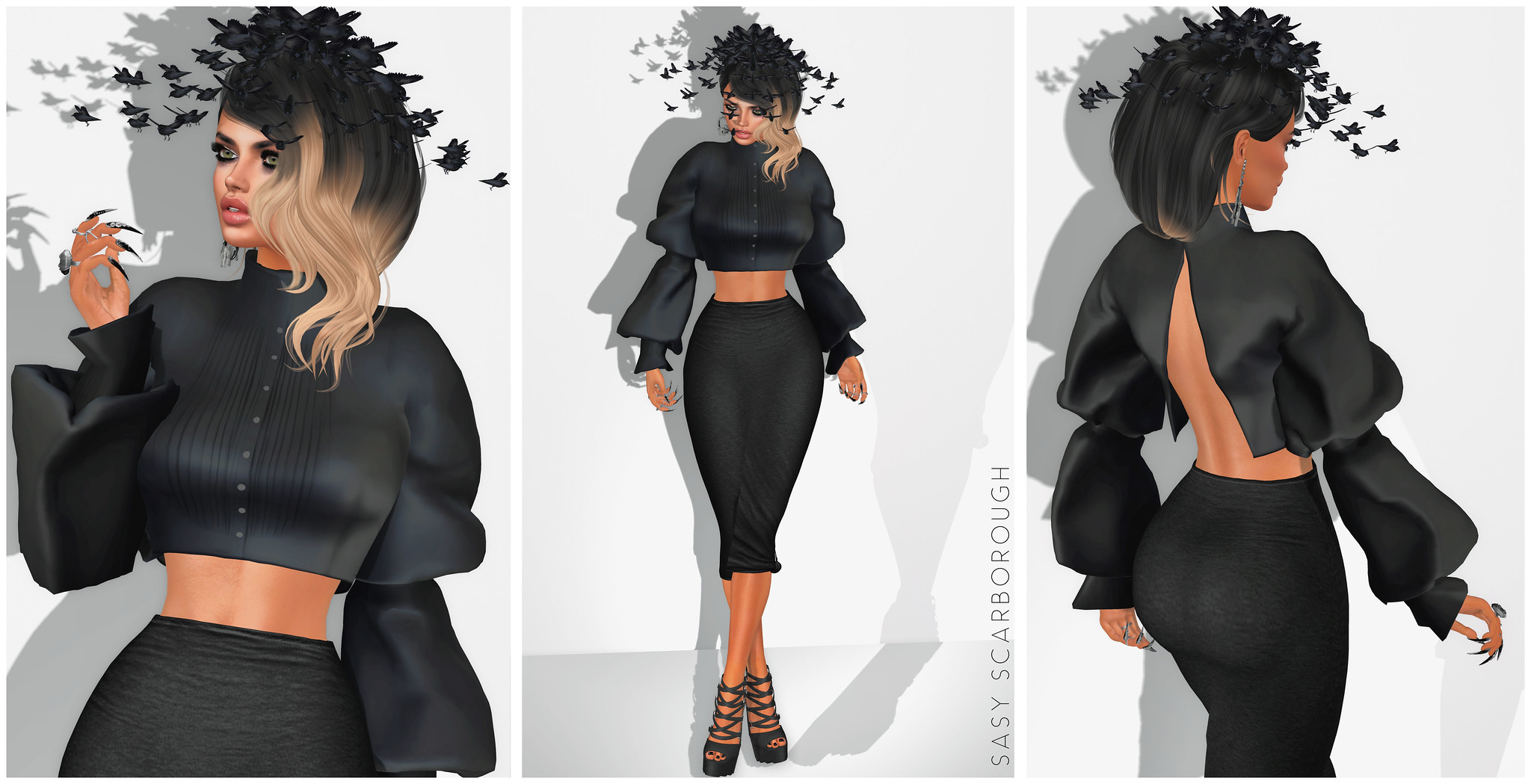 There are a lot of things I know about wearing mesh, how it works, what is involved in creating it, how it should fit. Most of the time I am aware why something does something, and on a rare occasion, I have some kind of a breakdown in what I know vs reacting to something I see at the moment.

I was doing a round of some weekly event a few weeks ago, and I fell head over heels for an item of clothing in a store, I tried on the demo and saw that there was no Slink Physique Hourglass option, but it did have a Slink Physique Original option…this blouse was so stunning to me that I was ok with that, I could swap between bodies as needed. I then purchased the fatpack and on unpacking saw that there was, in fact, an Hourglass size included. I was confused but thought my goodness maybe it was added after some release, but if Hourglass seekers were thinking they had no option based off of the demo, this was a terrible thing. I contacted the creator, thanking them for making such a stunning blouse, and that there was no Hourglass in the demo, and they may want to fix that so everyone like me could snap up this stunner.

I bought other things, also beautiful but my heart was taken by this blouse. I went home, I put it on and was playing with the options as the colour worn today was the demo and I had not noticed anything odd, it also had a demo sign and was in a different body size, plus as you can see I was taken aback by the back… such a beautiful blouse. I put on the satins, the prints and the solids and to my dismay, the buttons were clipping, the shirt was folded along the shirt front, now this is not actually separate mesh it is smooth across the chest it just has the texturing to give the illusion of a button up shirt style. So the overlapping had me in shock and that is apparently where my brain broke. You see I was so distressed by this, because of the love affair I wished to have with it, I was blinded from common sense. I panicked and tried on other versions, thinking that perhaps the one I had on had been incorrectly labelled – that has happened many times to me, always check other sizes if something seems to not fit in a very big way – but alas no. I realised that the dark colour of the demo and my excitement and it being the other body size had somehow blinded me to seeing something that I would not have usually missed. I already had the creators IM open, as I had contacted them about the demo etc. So I took screenshots and I sent them a message explaining there was an issue.

Then a few days later I was trying on a bikini top, and the join at the cleavage had a bow and the bow was distorted and my very chill mind went oh ok I see what is going on there, because you remember I KNOW THINGS!… so as I have done one trillion times before, I went into my shape and adjusted my cleavage join slider. Now this slider in our shapes is the fixer of many things, and one is when things in between your breasts either stretch or overlap (in some cases it can even help when the outside of the breasts are poking through the mesh slightly…I KNOW THIS! but I will admit that in the trillion times it has happened before it has been on tops that came in close to the body, bikini styles mostly, it is often because the shape the creator is using to build on is shape defined by their own settings so if you are off the mark then that can cause issues. So imagine when my embarrassment to have this knowing stuff brain kick in for the bikini top and then my realisation that it did not kick on for this gorgeous blouse. Because yes folks that is exactly what was happening, the same change I made to shape for the bikini fixed the blouse and the rest is history. So when I finish this post, I will be IMing the creator of this magnificent blouse and apologising for my brain meltdown that day and thank her again for making such a divine top that I want to wear with all the things.

So here is the perfect blouse that I love called Vintage Blouse by Ane worn with a favourite skirt by Miss Chelsea. I plan to wear the blouse with pants, jeans, everything I can. The strappy shoes by Breathe were perfect for the style – these shoes are part of an event that works at the event and in the store together, the black and fatpack are at the event only, the colours singular are at store, fun idea giving people the chance to visit both. Just make sure it was clear that I was definitely owning my error, this amazing crows headpiece by Zibska worn atop the Haven hair by Exile just has me styled to the nines, tens and elevens.

He knows that Luke should either decide that he can do it or decide to quit.
Aphorism Examples in Everyday Speech
Other Common Examples of Aphorisms
It originated from Lady Mary Montgomerie Currie’s poem Tout vient a qui sait attendre.
And then.
They’re in social media captions all over the web.
Proverbs, on the other hand, can be much longer than aphorisms and adages.
So what do you do.
Remember that.
This is especially true if the excuse is a lie.
Oftentimes, it makes sense to delegate tasks.
Skilled writers use aphorisms to evoke big ideas in a relatable way.
Your stories can benefit from this method too.
How many times have you heard one of the following aphorism examples.
And since they’re universal truths about life, they help persuade your reader to accept your message.
What does it mean.

And since they’re universal truths about life, they help persuade your reader to accept your message.
What does it mean.
He played the villain in the movie that famously stated.
Honesty is the best policy.
He’s earned that title because he’s authored dozens of aphorisms.
Finally, All things come to those who wait is a good aphorism we’re all familiar with.
And then.
Aphorisms are so common that we hardly think twice about them.
Early to bed and early to rise makes a man healthy, wealthy, and wise.
So what do you do.
He knows that Luke should either decide that he can do it or decide to quit.
This is especially true if the excuse is a lie.
Other Common Examples of Aphorisms
Another memorable aphorism is, An apple a day keeps the doctor away.
From there, you can build your story around it.
Now here’s the big question.