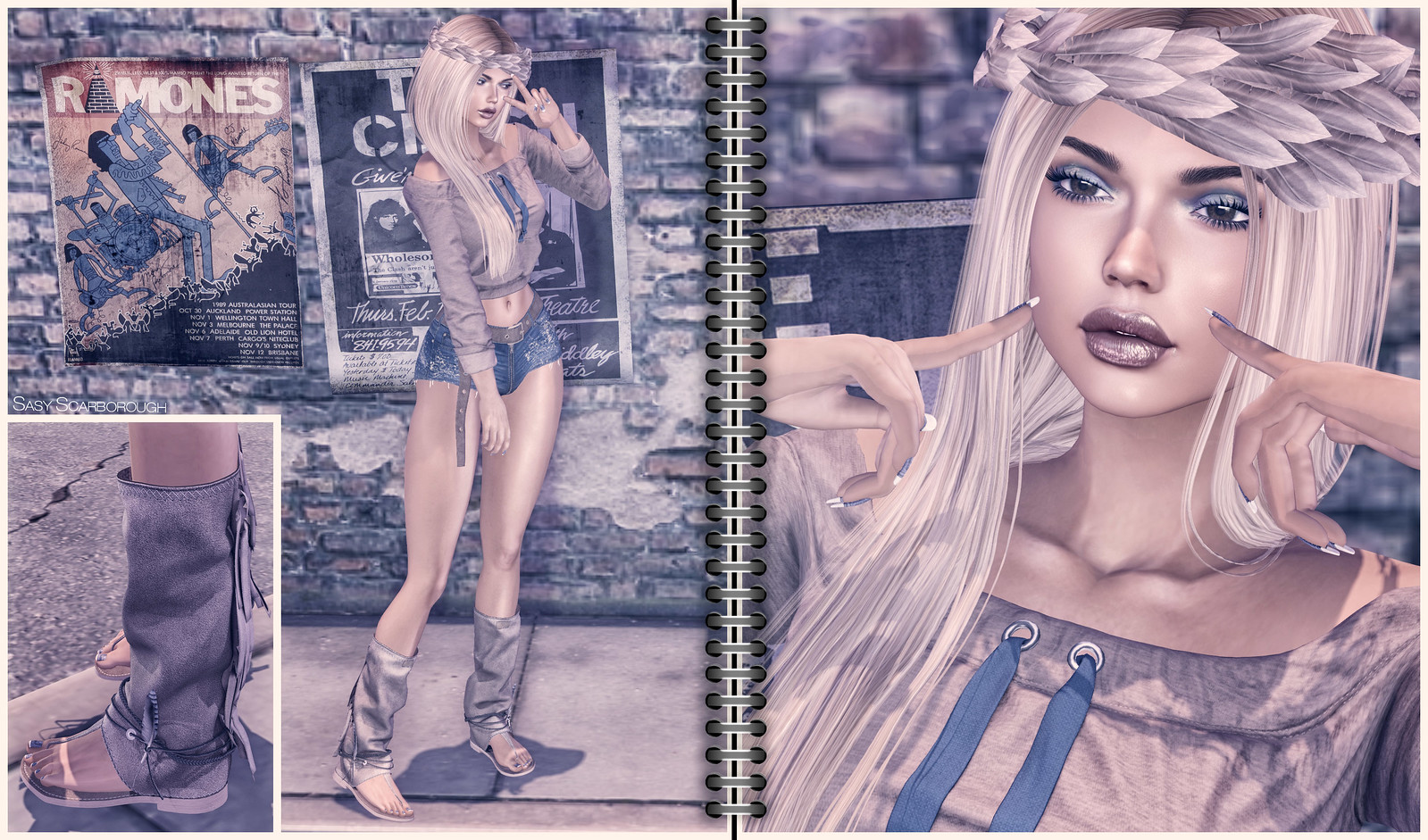 A Second stab at this theming my days’ thing, and as I am a day ahead of most of Second Life, it will truly confuse people, especially when it only just 2 minutes past Midnight into my Wednesday as it is. I played around with the wording and realised that ‘When’ is such a cute idea, as it means I can kind of emulate anywhere in time if I so desire. This look kind of morphed into a very sort of mid 70’s California Love Child look. With some feathers atop my head, and some feathers tickling my toes, it all came together well. Especially as this crown of feathers fit so well over this lovely straight style by Mina Hair.

The very noticeable difference in the post is my eyes, I am usually green-eyed in Second Life because when I joined the brown eyes were so flat and dark that I just looked as though I had holes in my head and green eyes and the red hair I started out with work. I tend to not touch my eyes either, I have worn LeLutka eyes since as far back as they made their first set, and each time they made new ones, I would kick and scream and finally give in to changing. Today though I wanted to show the lovely eyes by Avi Glam that are part of this months Look Book. There is a nice selection of colours and they come in three sizes of appliers. I am also wearing some eyeshadow/highlight and lipstick by Flaws also part of the Look Book. The eyeshadow options come in either just eyeshadow or with a highlight that adds some nice subtle shine to your face.

I used the blend options in the LeLutka Head HUD to lighten both the lipstick and the eyeshadow because they are very rich by default, but as it was daytime, I wanted to just give them more of a there but so there look. Which is perfect for day and then up with the slider and boogie the night away.

This top is by Vinyl and even though it is more of a modernish casual vibe, it actually is very in keeping with clothing of the 70’s. I had a few tops as a girl with the full pocket front where you could hold your own hands, and the pulls at the neckline was also a very popular idea, as it meant that clothing could be shaped depending on mood with the ties rather than with a lot of structural sewing.

Then down to these amazing cut off shorts by Blueberry, that have so many options in the fatpack that you will spend so much time looking at your bottom and playing around with the options of prints, colours of denim and then the added bonus of being able to actually put writing on your front and back of your shorts. It would have been far too corny had I written Sasypants across my pants. The belt also has texture change options and both stores palettes make me happy with coordination powers.

These boots are just something that made me giggle at first, then take a lot more notice and then fatpack. I have seen this style in the past, it has been attempted a few times by different stores as far back as sculpts, however, each time I would be kind of intrigued they just didn’t pull me in. These did. The upper and fringe and sole have texture options, and there are even some prints, the suede work is incredible and the fringing and feather adornment fantastic, my only wish was that I could change also the thong portion as that would have made my colour combos play even harder. The fact that the feather had a hint of blue in it calmed me down though – I do wish that had texture change options too, but we cannot have everything and they are really wonderful very Aussie Centric footwear, thongs in freezing weather but with covering up the leg, perfect.

Lastly, I was going to town with some backgrounds by WearHouse who I have blogged in the past with makeup, I am also wearing their Dolly Lashes, so cute. This is a street scene prop and it comes with stackable versions as well as texture maps for the posters so you can make your own and electric boxes and footpath and road and it is just great and easy to be inspired by. I ended up getting at least 6 different ones so you will see more of those soon.