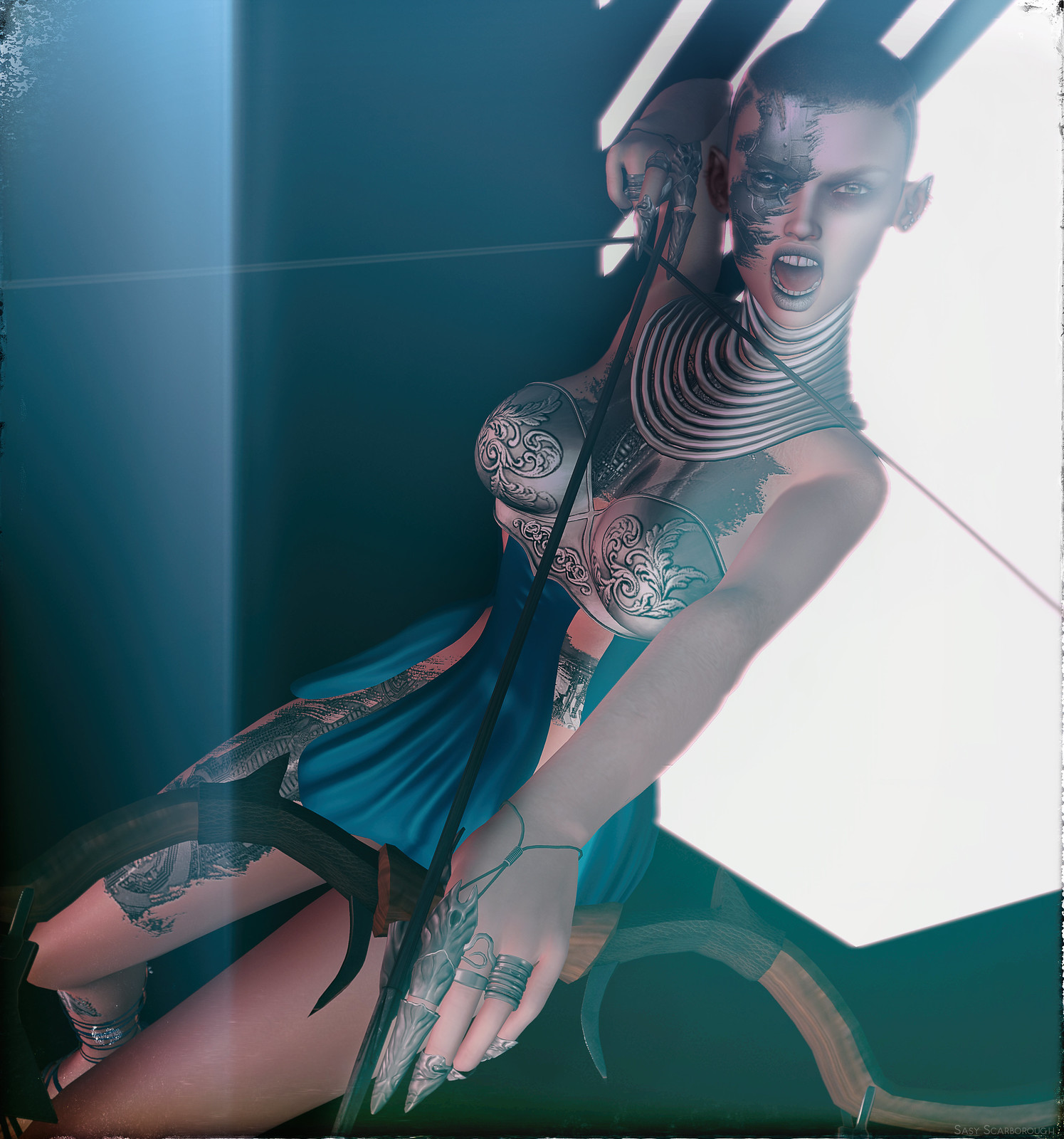 You see something that is just lovely, and you want instantly to own it, that was how I felt about the Odalisque’s Claws by Cynefin. However, while the ad was so pretty, and they had me thinking I would do something all whimsical and fantasy like, that changed. The claws are bento fit and at first I was all about the option to not have the strap around the wrist…I got the fatpack and once I had on the silver, I knew that it was time to bring out the Pris skin appliers by YS&YS that were from a recent <3 RP event.

The skin appliers come in Elf or Vamp or Orc skin bases, but because the face work is actually a tattoo layer, I went with a beautiful skin layer of Serene also a YS&YS skin, given a more what is really underneath vibe. I had been shopping with Ashia and Whimsy at RO Poses and grabbed all their Bento poses that come with props, one of which was this perfect bow and arrow, and instantly I knew that I need to put on the wrist straps version of the claws as the whole vibe was now Warrior Woman of the future, or past if you like conspiracy theories.

I got to use a lot of bits and pieces that I have wanted to for a while now, this hairbase being the main one. Mina released a hairstyle a while ago now, and as soon as I saw it I fell in love with the hairbase, however, eachtime I went to wear it with something I would end up in something else, often other hair of hers, but still. Today I decided that the hairbase was staying and the hair was going to stay off as it is one sided and would have covered my other hand. The shaved lines hairbase is a winner, and comes with appliers for LeLutka and other heads with omega appliers also.

The metal work also comes in body appliers, mixing them with these burns by Izzie’s that are intense but when you are a hot cyborg you sometimes just need to dive into the fires for various reasons and sometimes your skin regeneration doovahikiethingymabob hasn’t fully charged.

I grabbed this cool dress with the awesome collar off of Marketplace, and it was perfect for the look I was going for, it also has armbands and bracers, but I did not want to detract focus from the claws. The fatpack options let you change the colours of the claws making mixes if you like, and there are great texture options, but the silver was just that right side of steel for me.

I hadn’t worn my Mandala ears for a while, and this was the time to bring them out, with the jewellery options and the adorable silver tips using the pixie size option, they fit my head really well, as you can open and close the holes with shape sliders when you turn off your ears on your LeLutka bento heads.