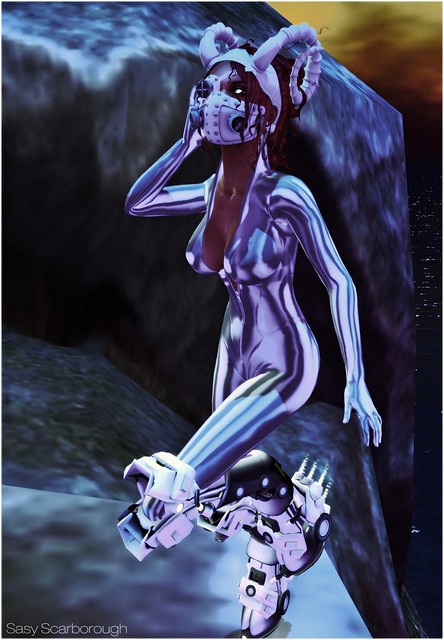 Yesterday it started with the shoes, today the hair. This spectacular style is by RedMint and honestly the tendrils, the rams horns, everything about it is divine. The horns come with a texture change option on the hair colours hud, and there are enough options to go with everything.

I of course immediately thought of doing a picture on rocks, and rocks = Whimsy = Slink West…trust me it is a natural progression – Whimsy did the landscaping at the Slink West outdoors area, and the surrounding commercial areas. Then I decided that I wanted some faun legs and remembered the ones I bought years ago from Epic, so they are sculpts not mesh, but still look great. I did however think of wearing black ones, but when I purchased those they were so black that there was not the same detailing visible as with the white, so I went back to those.

Applieing my Vixen Catsuit from Slink, and I was ready for action. I also found these really cool mask and eyepatch sets on Marketplace, they were only 70L for the set, which was bonkers inexpensive, and the fatpack is a great deal, I did end up going back for black as I mentioned, so all in all the fatpack would have been the smarter move, but so inexpensive I could still do that and save.