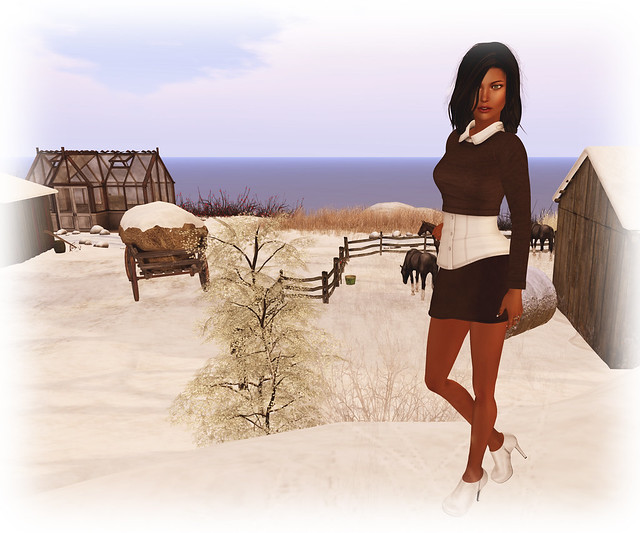 So yesterday was a Linden meet & greet at a great sim called Frisland. It is a wonderful wintery themed sim, and I really enjoyed the company of so many Residents, Lindens and some familiar faces of both. Before it started I took a quick spin around the island with Whimsy, who had to leave early, and took a snap in my not so wintery, but maybe just a little bit, look.

I was dying to wear my new sweater and shirt all in one from Gawk that I picked up at the Winter themed event we went to the other day. The great thing is that Gawk is having a 40% off gift cards sale – hopefully still on – so we ran over to the store, bought some cards, redeemed them, and then went back to the store and shopped, so we saved on items for ourselves, so definitely something to think about doing yourself too not just for presents.

The ankle boots I am wearing are from Essenz and they are so sexy. They are called Brisbane, which is very hot right now being summer down under and all that. They were part of the Frozzen event that went on until the 15th of December, so I expect they will be in the mainstore now. These go with the Mid feet from Slink and are just great for wearing with pants, or a skirt such as I am wearing in this look.