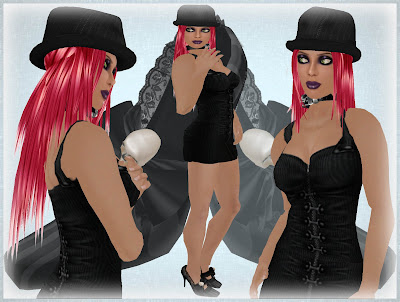 Seriously I was so proud of myself on friday getting two lots of posts ready way early in the day for the next day, only to realise that I posted them in the wrong order. Not that that matters too much but I had shown the owner of Kari this pic and then used a completely different hat pic lol.

Anywho, Canimal has wowed us all with her latest release of the Abaddon dress and the fantabulous Gothdamn shoes. So there they were dieing to be worn when I saw the post of the latest Kari hats, yesterdays Guerilla hat and todays Rude Boy hat. As soon as I saw them I was off and running, the Rude Boy craze was huge here in the 80’s as it was in the UK and surrounding countries , not really sure about the rest of the world.

As soon as I saw the Rude Boy I knew it was Kismet – waves and giggles – the Abaddon dress has a thick cord style fabric with a full length steel zipper underneath a fancy row of eyelet style buttons. Everything a Rude Girl back then would have loved in a dress, and this girl loves now.

Skin tight black jeans, tartan mini’s or a dress just like this one was the uniform so to speak of choice , so I was loving the concept of mixing the items together for this post. The hat was made for boys hence the name, but is mod and has a wonderful texture change script in it too. As I said yesterday I have all of the Kari hats now and cannot wait for more.

In Rude Girl fashion it had to be all about dark make up, I swear Rude Girls I know got their eyeliners down to stubs very fast they were reapplying constantly – probably had allot to do with the make up back then though lol. I am wearing the fantastic Vivant skin by Fleur in the Bilba 3 make up and its just gorgy for this kind of look. Deep plummy lips and black charcoal like eyes, Yummo.

The collar is from the Lilith set from Dark Eden, another accessory Rude Girls were always wearing, again the fantastic Gangsta add on hair from HCT means under hat hair is a breeze , and I just had to go for the pinkish tone dye look – hair dye and eyeliners was what it was all about . 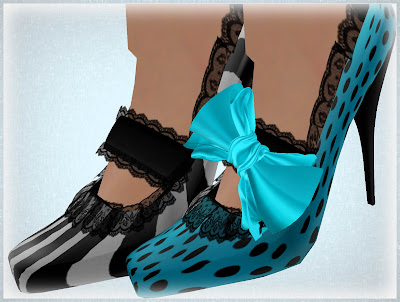 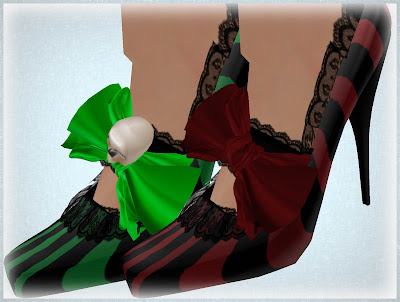 Then we have the shoes, and aren’t they just too pretty. The Gothdamn shoes are available in an assortment of dynamic colours in either the stripe or the dots print, but its all the other little features that just make them so impacting. First off I think the skulls are cute lol , but I was so stoked to find that they are scripted to go invisible, and so are those killer bows. You get the choice of the main colour of the shoe or black as a bow option as well as invisible also.

So one pair of shoes has four ways to wear them, and more if you went mixed up having both shoes different lol. I love the straps across the foot and the lace edging around the rim of the shoes , just divine. Great job by Canimal on making these shoes look so stylish and delish.