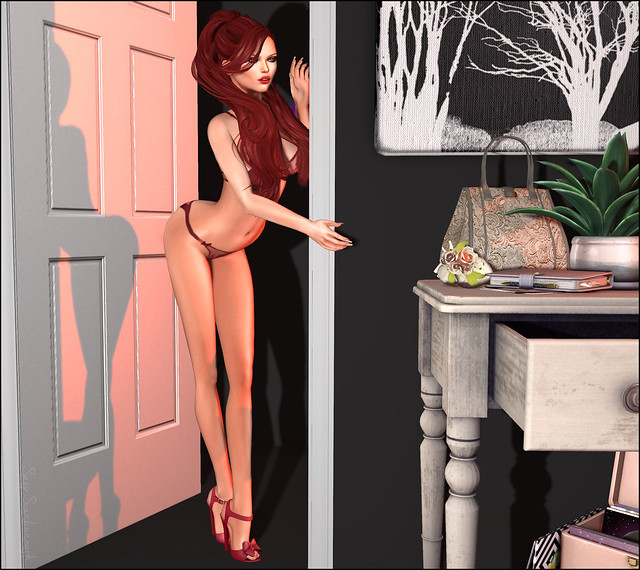 Pose Fair and Skin Fair both just kicked off, and what a lot of fabulous things are to be found at both. VR foundry, that makes the studio system that I use for everything I do, has released the Doorway sets of poses with the mesh doorway that you can edit for texture, and also edit the door to be as open or closed as needed. This is a great prop to have, not only with the poses that are included – there are two sets to purchase – but also the hundreds of poses that you may already own, that need that little something to bring them to life.

This is one of my favourites of the poses, as it can be shot from different directions and create such different looks. This time it looks as though I forgot something and am just reaching around to grab it off this table of wonderful things. Turn your camera and zoom in and you can look as if you are peeking around the corner or hiding…fun to be had. The sets include mirrors, so that makes life much easier, as you may want to use them on either side of the doorway.

I am wearing a skin release by ItGirls at Skin Fair, and it has such a severe model type face, that I really find it attractive for that kind of look. Not sure that I would be able to carry that look day to day, but I liked it enough to grab it for when I am feeling striking. It has hairbase options, brow options, freckle options and a few lipstick and shadow options…and the big win was that the physique body appliers for my slink items were included.

Showing off the beautiful body in a modest way, with the lingerie by Luxuria, this is a more revealing set of lingerie than I would show in full form myself, but you get enough of a sneak peak to see how beautiful it is, so you need to get yourself some, so that you can also show off your new skins. I love this bag by Baiastice, it has such a feminine quality to it, so this time around I decided to use it as a prop instead of as an attachment, and it works with all the planner and stuff on the table by other creators.

Lingerie, big hair, new skins and adorable and sexy footwear, it is a glorious day. The shoes are at the ongoing round of Collabor88, and they have a vintage air, but made with high feet in mind, making them sexy and sweet all at the same time, as Ingenue pulls off greatly and often. The big hair is by Analog Dog and is at this round of Hairology, another event going strong, so you have lots of places to go if your other choices are full for the time being.